Jon is ready to brew it up a notch! He brought a huge upgrade to Layger Brewhaus on June 17, 2014 after spending all day with his father assembling his first all grain brew tower from Blichmann.

There was a lot to assemble: the tower structure itself, the pipe fittings that carry propane from the external tank to two burners, all the control valve assemblies, the hoses that cascade the hot water down to the mash tun, the valve and bobber in the mash tun, the false bottom that prevents spent grains from draining down from the mash tun to the boil kettle.

On this maiden voyage of the brew rack, we brewed outside for two reasons: the weather was nice and we figured you have to run those two giant burners outside for ventilation! This first brew batch took over 9 hours–not including assembly time–as we learned the new workflow on the new gear.

Jon anticipated a problem with future brews: spending 9 hours outside in the dark on Colorado winter evening was going to make brewing a lot less fun. Engineer that he is, he invented a ventilation system so we could brew in the Layger Brewcellar: two window fans bungee corded in place. You can see them behind the brew tower in the basement photos below.

Jon, during mash. Note the two fans behind the tower exhausting outside.

The move to the cellar was not without problems, aside from the disassembly and reassembly. Dave smelled gas–a lot of it. The many pipe fittings and hose connections involved with the rack were leaking propane — and not a small volume! After very temporarily setting small fires outside the pipe fittings (super dangerous!), Dave and Jon spent about 2 hours wrenching connections tighter until the tower leaked no more. The first brew night in the basement thus took at least another 9 hours.

The next problem was water. All grain brewing requires 8-9 gallons of very hot water. Our choices to get water into Jon’s tapless basement were hose from outside routed through the window or carrying buckets or store-bought gallons down. Hoses are  notoriously contaminated with mold and mildew. so manual labor it is.

But as intermediate homebrewers know, most beer snobs ask that you boil your municipal tap water for 15 minutes to gas off chlorine and other added chemicals that can cause off flavors. Yet the temp ranges for mashing grains are much lower than boiling and cooling off boiled water takes a lot of time.

Grocery stores offer two main types of bottled water: spring and distilled. Spring is unregulated, contains minerals not necessarily called for in a given recipe, and can contain contaminating organisms. Distilled water has no minerals, making it ideal for building a mineral water profile from scratch, but if you just want a basic tap water mineral profile, you really can’t use distilled water.

Jon’s brew tower has a burner to heat the water (step 1 above) and a burner for the boil kettle, but there is no middle burner to maintain mash temperature. We have struggled to maintain the correct mash temps (step 4 above). The insulation in the photo below shows one attempt that has helped–but not solved–the problem. The way most all-grain brewers solve the mash temp problem is by using a large, insulated Gatorade-style water cooler with a false bottom and a spigot. We just don’t feel great about routinely putting hot water into a plastic container. 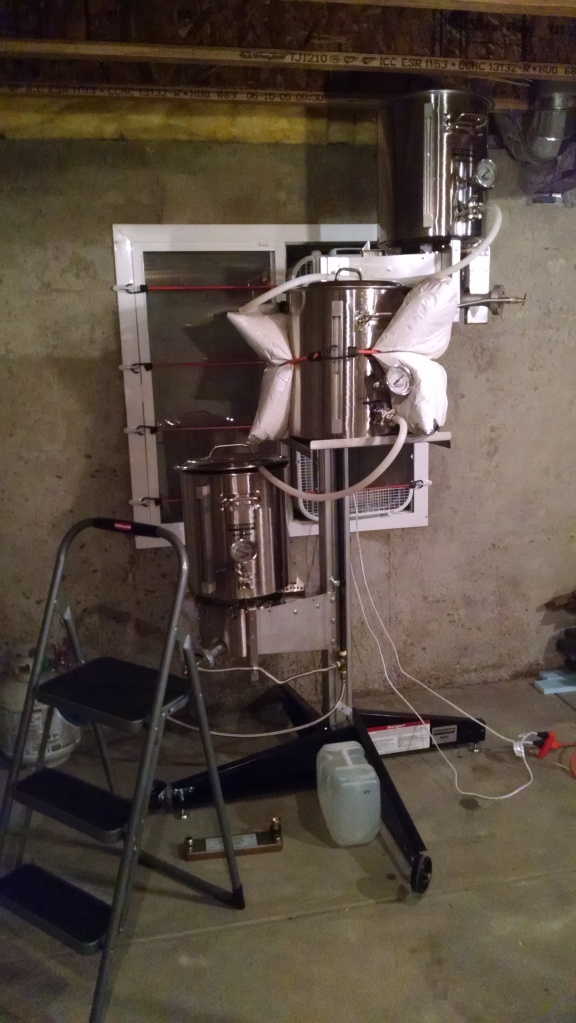 Homebrewers want to cool their boiled wort as quickly as possible. Aiding us in this endeavor is a new wort chiller plate that robs coolness from a garden hose in exchange for hot wort heat. It’s on the floor just behind the stepladder. Does it work? When it works, it chills 5-7 gallons of 200 degree wort in about 20 minutes. But when it gets clogged with hops flowers or hops dust that’s escaped our hop bags, rectifying the problem can easily at 45 minutes to brew night. We think the solution is very fine mesh hop bags and more care in handling them.

When It All Goes Well…

Our best time so far, start to finish, is 6 hours to brew two batches. Our execution was flawless and the equipment cooperated. Most brews, we’re looking at 7-9 hours. On brews with complicated grain schedules, long boils, or wort chiller plate clogs, we’ve approached 12 hours.

Can a Polaroid camera take a great photo? Sure, if the raw ingredients are right and you get lucky. The new Layger brew tower gives us total control over the brewing process, just as using a DSLR or film camera on manual gives you full control over your photo. And, yes, it requires more knowledge and skill to brew a better beer.

In the end, this new tower has already pushed us in new directions and to higher heights. Our beers are better. We’re more creative. We write our own recipes. We’re in control, for better beer or for worse!